‘We’re Moving in the Wrong Direction’ 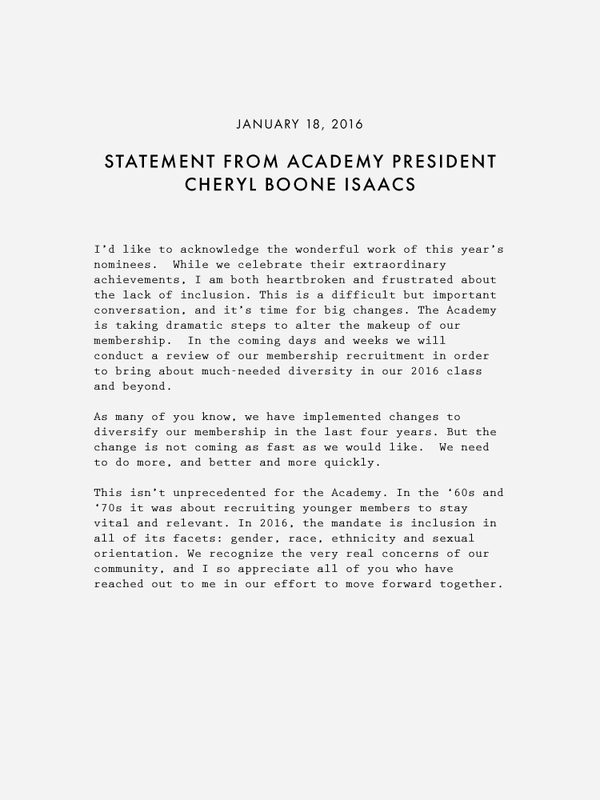 
"If you think back 10 years ago, the Academy was doing a better job. Think about how many more African Americans were nominated. I would also make the argument, I don’t think it’s a problem of who you’re picking as much as it is: How many options are available to minorities in film, particularly in quality films?

I think we have a lot of points we need to come to terms with. I find it amazing that we’re an industry that in the 1930s, most of our leads were women. And now a woman over 40 has a very difficult time being a lead in a movie. We’re seeing some movement. Jennifer Lawrence and Patricia Arquette have made the loud pronouncement about wage disparity, have put a stamp on the idea that we got to pay attention. But we should have been paying attention long before this. I think that African Americans have a real fair point that the industry isn’t representing them well enough. I think that’s absolutely true.

Let’s look back at some of the nominees. I think around 2004, certainly there were black nominees — like Don Cheadle, Morgan Freeman. And all of a sudden, you feel like we’re moving in the wrong direction. There were nominations left off the table. There were four films this year: “Creed” could have gotten nominations; “Concussion” could have gotten Will Smith a nomination; Idris Elba could have been nominated for “Beasts of No Nation;” and “Straight Outta Compton” could have been nominated. And certainly last year, with “Selma” director Ava DuVernay — I think that it’s just ridiculous not to nominate her.

But honestly, there should be more opportunity than that. There should be 20 or 30 or 40 films of the quality that people would consider for the Oscars. By the way, we’re talking about African Americans. For Hispanics, it’s even worse. We need to get better at this. We used to be better at it."
Luna, 1/22/2016

The Bat: The First Harry Hole Case
by Jo Nesbø

Memorial do Convento
by José Saramago

The Leopard
by Jo Nesbø

The Adventures of Sherlock Holmes
by Arthur Conan Doyle

The Adventure of the Copper Beeches
by Arthur Conan Doyle

The Adventure of the Beryl Coronet
by Arthur Conan Doyle

The Adventure Of The Noble Bachelor
by Arthur Conan Doyle